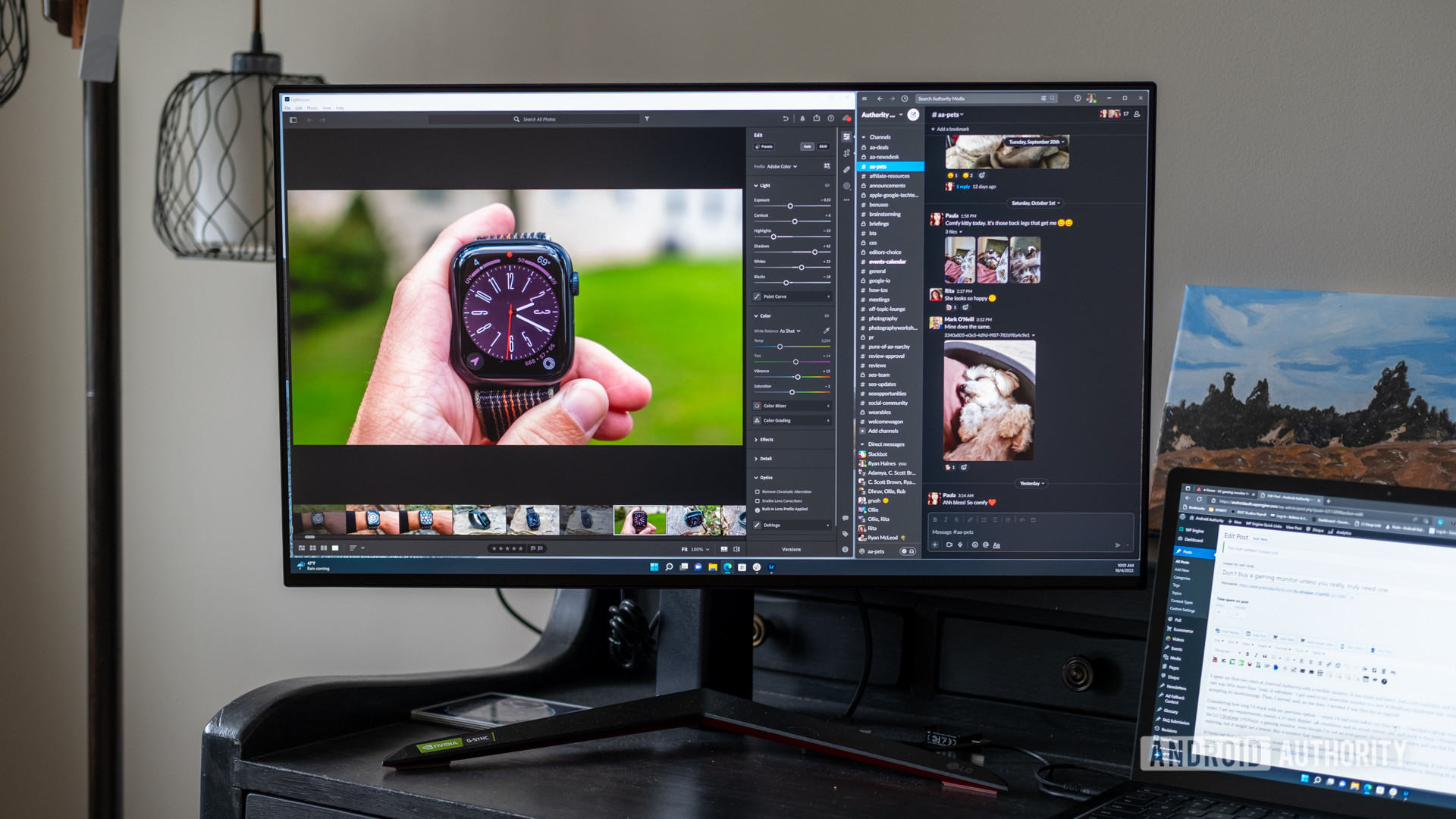 A gaming monitor for everyday use?

I spent my first two years at Android Authority with a terrible monitor. It was small and heavy, had a low resolution, and the refresh rate was little more than “yeah, it refreshes.” I got used to my miserable monitor in a sort of Stockholm Syndrome way, eventually accepting its shortcomings. Then, I moved, and, as one does, I decided it was time for an upgrade.

Considering how long I’d stuck with my previous option — which I’d had even before my time here — I decided a splurge would be in order. I set my requirements, mainly a 27-inch display, 4K resolution, and an actual refresh rate, and stuck to them. Ultimately, I chose the LG UltraGear 27GN950, a gaming monitor, even though I’m not an avid gamer. It’s an excellent monitor and one that I’m really enjoying, but it taught me a lesson: Buy a monitor that meets your needs, not your aspirations.

It turns out that a high-end gaming monitor is more than I needed and that there can be too much of a good thing. If you’re not a die-hard gamer, you might be better off with an ultrawide monitor or maybe a 4K TV, but I learned some lessons by choosing all-around power.

About this article: I tested the LG UltraGear 27GN950 for six weeks. The unit was bought by Android Authority for the purpose of this article.

What they say about big feet

From the minute you open the box and set up the LG UltraGear 27GN950 — an absolute mouthful of a name — it’s clear that the monitor aspires to do more than Facebook scrolling and YouTube streaming. The style cues are aggressive, from angry red accents pulled from a Rian Johnson Star Wars film to a massive RGB lighting ring that fell off a circus tent.

I can live with most of the choices, as they’re hidden away behind the monitor itself, but the stand is another story. You’ve probably heard the saying “measure twice, cut once,” but in this case, it should be “measure twice, buy once.” The UltraGear 27GN950’s long, angular legs and broad base stretch far across my desk, creating a hefty footprint. I’ve had to rearrange my setup to accommodate it, something I wasn’t expecting after the modesty of my last monitor.

The aggressive red details and massive RGB ring leave little doubt — this is a gaming monitor through and through.

The monitor stand isn’t particularly adjustable, either. It shifts up and down, but I’ve had trouble pivoting the display to the left or right, forcing me to rotate the entire stand to find the perfect angle.

Thankfully, you do have the option of mounting the UltraGear 27GN950 to your wall, though that might make accessing the ports tricky. They sit right next to the mount point, so you might end up reaching blindly to attach cables. Mounting does solve the issues with LG’s large and hefty base, though.

You might also want to familiarize yourself with the UltraGear’s controls as you set it up. There’s a small wheel and a D-pad along the bottom edge, the latter of which allows you to tweak settings for different game modes. It dictates your brightness, contrast, and all the other fine points you’d expect from a high-end gaming monitor. I recommend trying them out before you get too far into your gaming session, as it’s somewhat tricky to navigate the D-pad without looking at it.

Interested in other options? Here are our favorite 27-inch monitors

A broadsword to a knife fight

Once you get your monitor into position, everything else is a breeze. The LG UltraGear 27GN950 packs more than enough connectivity options, with two HDMI ports, three USB-A options, a DisplayPort, and a headphone jack. Right now, I’m only using an HDMI port to connect to my laptop dock, but it would be easy enough to daisy chain one monitor to another for even more real estate.

The 27-inch Nano-IPS panel itself is brilliant. Its 4K (3,849 x 2,160) resolution is crisp, and the 144Hz refresh rate is smooth and stutter-free. The only bezel worth mentioning runs across the bottom edge, and even then, it’s only about as thick as an iPhone’s notch. I can’t speak to Nvidia G-Sync or AMD FreeSync, but as a photo editor, LG’s color accuracy is exactly what I wanted. I used to run Lightroom off my 13-inch laptop display, making do with the limited space and keeping myself to one menu at a time. Now, I can offer my editing process about two-thirds of the LG UltraGear 27GN950, with enough room left for my Slack messages.

My secondary use — after I’m done writing and editing for the day — is for streaming. Not Twitch, as we’ve already established that I’m no avid gamer, but video. The UltraGear 27GN950 has become my Sunday night companion for House of the Dragon, and it’s already calling my name to catch up on Andor. LG’s matte finish means I don’t have to see my reflection as I plow through snacks, and the previously mentioned color accuracy means I don’t actually miss streaming on a TV instead. LG’s brightness controls also mean that you can tweak your picture, so you’re not one of the many viewers complaining that House of the Dragon is too dark — it’s brighter than The Long Night from Game of Thrones, anyway.

The main problem, as far as my needs go, is that I have too much of a good thing. Using the UltraGear 27GN950 is like taking a Ferrari to the grocery store. It’s capable of everything I need, yet I feel like I’m not living up to the monitor’s lofty expectations. True gamers will make far better use of the blistering refresh rate and GPU syncing features, but I’ve learned a tech lesson that I probably should know by now.

In picking a new piece of tech, it’s better to buy for your needs rather than for your aspirations. When I bought a camera, I chose the reasonable and well-rounded Fujifilm XE-4, not the high-end XT-4 or X-Pro3. The more expensive cameras offered more in the way of features, yet they far exceeded my needs at the time. My monitor buying experience tells a similar tale.

I settled on LG for its excellent reputation, figuring that I’d had good experiences with the brand’s TVs and smartphones (RIP) in the past. Then I figured that going for specs above my current needs would lend a bit of future-proofing to my setup. Ultimately, I landed on the UltraGear series. I got lucky with a $200 discount that put the 27GN950 within my reach and figured it was too good an upgrade to pass up.

I can say for certain that I don’t regret choosing LG for my monitor. The LG UltraGear 27GN950 is a well-rounded powerhouse that’s yet to let me down. If anything, I’m letting the monitor down by not pushing it through RPGs or even racing games. That’s my story, but the real question is what lesson I can teach you about the RGB-loaded, high refresh rate promised land.

Well, if you’re a gamer, this setup is a no-brainer. The display itself is bright, sharp, and accurate as long as you can find the desk space. There’s not much else you can ask for in a gaming monitor. It’s far from the most affordable option, but you’re getting specs in line with what you pay for. I wanted, and got, a flat panel, though you might prefer a curved alternative if you have your sights set on gaming.

It’s a brilliant monitor, but the LG 27GN950 reminded me that it’s better to buy for your needs rather than your aspirations.

If you’re like me and looking for a monitor that you can use for working from home, there are better options. Not because the LG UltraGear 27GN950 has any major flaws, but because it’s more than most people need. I love using it to edit photos in Lightroom, but you can find similar color quality on many of LG’s more affordable monitors. You could answer emails and dominate spreadsheets with LG’s power at your back, but it’s like buying an Apple Watch Ultra for your weekly spin class — it works, but it’s not the right tool for the job.

Want to save some money? Here are the best monitor deals

The final decision might come down to how much you can spend on a monitor. At $799, the UltraGear 27GN950 isn’t cheap, but it’s been around for a little while, so you might get lucky with a sale or two.

The LG Ultragear 27GN950-B is a nano-IPS 27-inch monitor that rocks a 3840×2160 resolution. This flat-screen monitor has a tall stand, offers 144Hz refresh rate and a 1ms response time. It’s also G-Sync and FreeSync compatible.

What do you think? Would you consider a gaming monitor for everyday use? Let us know in the poll below.

Would you buy a gaming monitor for everyday use?