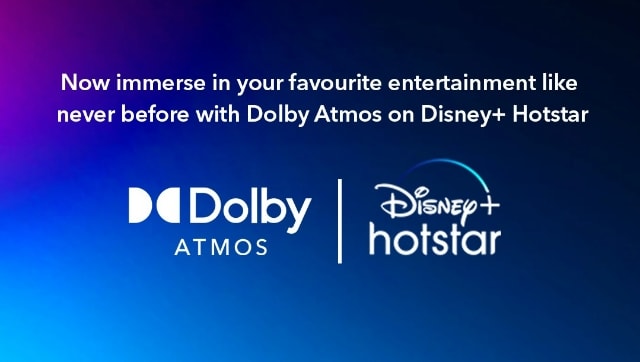 Disney+ Hotstar and Dolby Laboratories are all set to enhance the experience of its users of the platform by providing spatial audio support in the form of Dolby Atmos.

While the streaming giant had earlier offered Dolby Vision support, it has gone a step ahead to include Dolby Atmos playback for various devices including TVs, AVRs, soundbars, Android smartphones and iOS devices.

The facility will now help streaming enthusiasts experience Dolby Atmos through headphones via the Disney+ Hotstar app on smartphones that support Dolby Atmos.

Dolby Atmos goes beyond ordinary listening by offering a multidimensional, spatial sound experience that will immerse you more than ever in your favourite movies, shows, and more on Disney+ Hotstar.

Since the launch of Dolby Vision in July 2020, the crisp details and deep contrast of Dolby Vision HDR enabled the users of Disney+ Hotstar to catch every emotion flickering across a character’s face in a dark night shot. Now with the multidimensional, spatial sound experience of Dolby Atmos, Disney+ Hotstar puts its users in the middle of the action with stories coming alive all around them.

This feature is available to all of the platform’s users. Some of the popular Disney+ Hotstar titles now streaming in Dolby Vision and Dolby Atmos include Home Shanti, Rudra: The Edge of Darkness, November Story, Human, Grahan, The Great Indian Murder, Aarya, Shoorveer, Masoom, Ghar Waapsi, Out of Love, Special Ops 1.5, Vikram, Kaathuvaakula Rendu Kaadhal and A Thursday. Additionally, new titles from Hotstar Specials and Multiplex will also have Dolby Atmos.

Dolby Vision and Dolby Atmos on Disney+ Hotstar are designed to automatically adapt to one’s compatible device to give them a premium entertainment experience, no matter what they’re watching. The user can easily locate content in Dolby on the Disney+ Hotstar app by looking for the ‘Dolby badge’ on the title listing page.