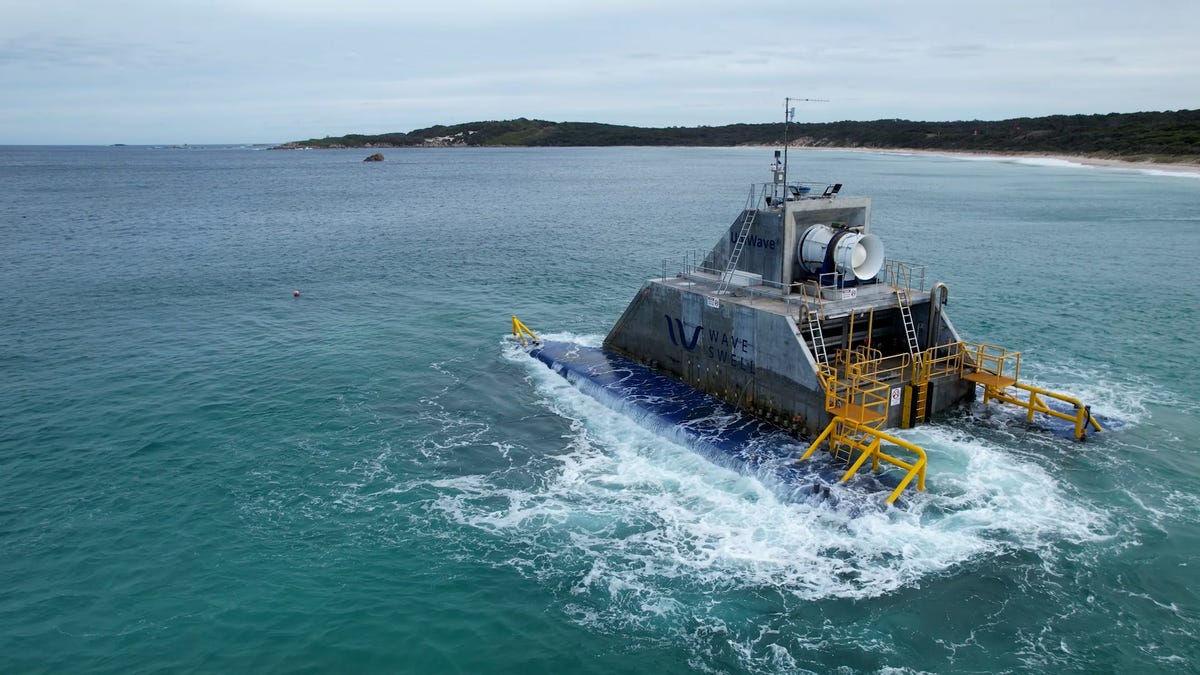 Could the ocean become a source of renewable energy? The company Wave Swell Energy is hoping for exactly that with its UniWave 200. The structure, with a large concrete base, has an opening for waves to enter through a hollow central chamber. As water rises and falls within the chamber, air gets pushed through a turbine, which spins and in turn generates electricity.

This chamber is an artificial version of a naturally occurring phenomenon called a blowhole, in which rising waves compress air in a cave and send bursts of seawater outward.

The device recently completed a one-year-long test run off the coast of King Island, Australia. Two of the primary metrics the Wave Swell Energy team measured during this time were efficiency and availability.

Paul Geason, CEO of Wave Swell Energy, tells me the UniWave200 achieved approximately 50% efficiency and 80% availability during its yearlong trial run. For comparison, wind turbines generally operate at around 50% efficiency, and solar panels generally operate at around 15%-20% efficiency, according to the University of Michigan’s Center for Sustainable Systems. Onshore wind turbines have been shown to reach availabilities of 95%-97%, and solar panels have been shown to reach availabilities between 92%-96%, though there’s some controversy over how exactly availability ought to be measured.

Geason says next steps involve continuing to improve UniWave200’s stats as well as making its technology more affordable and reliable, and available in various places.

Low-lying island nations, for instance, might reap multiple benefits from the UniWave200. Despite being among the least responsible for the changing climate in terms of energy consumption, countries like the Maldives are among the first to face the worst effects of a warming world, including sea level rise, coastal erosion and increasingly severe weather events.

Read more: Climate Change and The Justice Movement for a Greener Future

If these nations are forced to build sea walls to protect themselves, Geason says, he hopes UniWave200 could be built into the breakwater structures to make them into a value-generating investment rather than simply a sunk cost.

To see the UniWave200 in action, check out the video in this article.