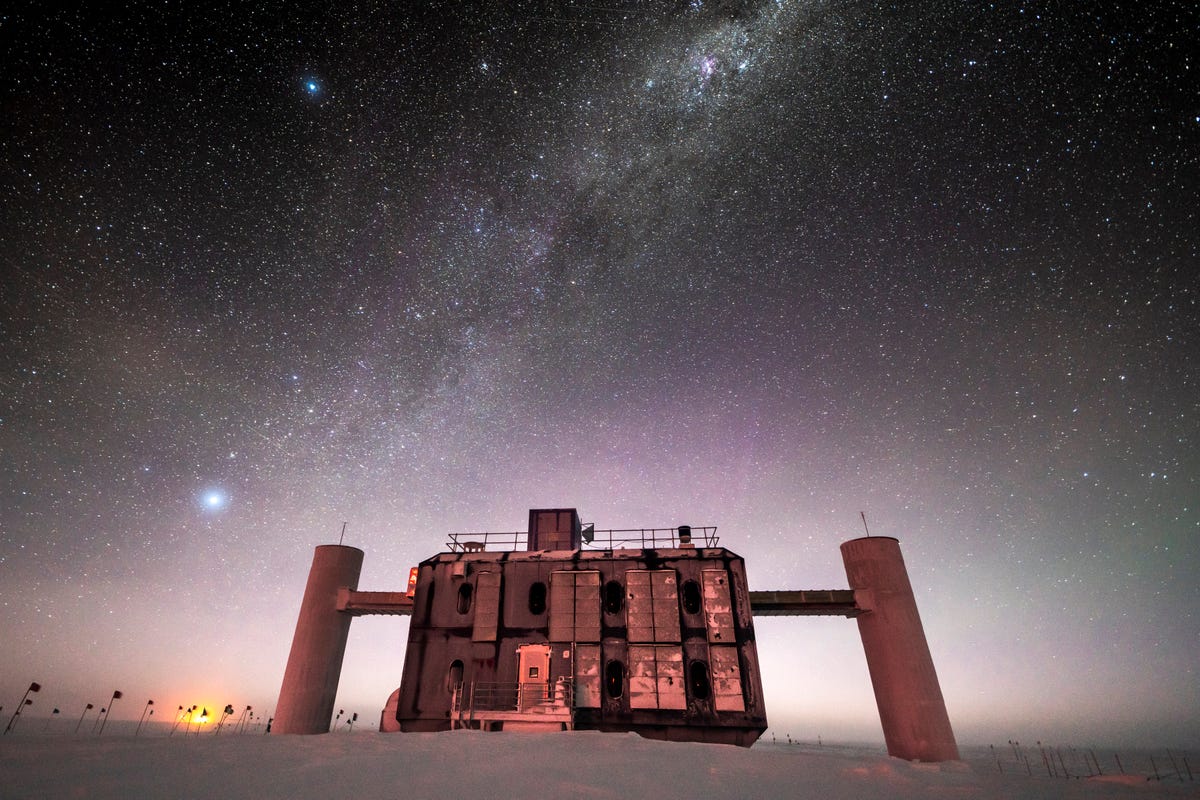 About 47 million light-years from where you’re sitting, the center of a black-hole-laden galaxy named NGC 1068 is spitting out streams of enigmatic particles. These “neutrinos,” otherwise known as the notoriously elusive “ghost particles,” haunt our universe but leave little trace of their existence.

Immediately after coming into being, bundles of these invisible bits plunge across the cosmic expanse. They whisk by bright stars we can see and zip past pockets of space teeming with marvels we’re yet to discover. They fly and fly and fly until, occasionally, they crash into a detector deep below the surface of the Earth.

The neutrinos’ journey is seamless. But scientists patiently wait for them to arrive.

Nestled into about 1 billion tons of ice, more than 2 kilometers (1.24 miles) beneath Antarctica, lies the IceCube Neutrino Observatory. A neutrino hunter, you might call it. When any neutrinos transfer their party to the frigid continent, IceCube stands ready.

In a paper published Friday in the journal Science, the international team behind this ambitious experiment confirmed it has found evidence of 79 “high-energy neutrino emissions” coming from around where NGC 1068 is located, opening the door for novel — and endlessly fascinating — types of physics. “Neutrino astronomy,” scientists call it.

It’d be a branch of astronomy that can do what existing branches simply cannot.

Before today, physicists had only shown neutrinos coming from either the sun; our planet’s atmosphere; a chemical mechanism called radioactive decay; supernovas; and — thanks to IceCube’s first breakthrough in 2017 — a blazar, or voracious supermassive black hole pointed directly toward Earth. A void dubbed TXS 0506+056.

With this newfound neutrino source, we’re entering a new era of the particle’s story. In fact, according to the research team, it’s likely neutrinos stemming from NGC 1068 have up to millions, billions, maybe even trillions the amount of energy held by neutrinos rooted in the sun or supernovas. Those are jaw-dropping figures because, in general, such ghostly bits are so powerful, yet evasive, that every second, trillions upon trillions of neutrinos move right through your body. You just can’t tell.

And if you wanted to stop a neutrino in its tracks, you’d need to fight it with a block of lead one light-year-wide — though even then, there’d be a fractional chance of success. Thus, harnessing these particles, NCG 1068’s version or not, could allow us to penetrate areas of the cosmos that’d usually lie out of reach.

Not only is this moment massive because it gives us more proof of a strange particle that wasn’t even announced to exist until 1956, but also because neutrinos are like keys to our universe’s backstage.

They hold the capacity to reveal phenomena and solve puzzles we’re unable to address by any other means, which is the primary reason scientists are trying to develop neutrino astronomy in the first place.

“The universe has multiple ways of communicating with us,” Denise Caldwell of the National Science Foundation and a member of the IceCube team, told reporters on Thursday. “Electromagnetic radiation, which we see as light from stars, gravitational waves that shake the fabric of space — and elementary particles, such as protons, neutrons and electrons spewed out by localized sources.

“One of these elementary particles has been neutrinos that permeate the universe, but unfortunately, neutrinos are very difficult to detect.”

In fact, even the galaxy NGC 1068 and its gargantuan black hole are typically obscured by a thick veil of dust and gas, making them hard to parse with standard optical telescopes and equipment — despite years of scientists trying to pierce its curtain. NASA’s James Webb Space Telescope could have a leg up in this case due to its infrared eyes, but neutrinos may be an even better way in.

Expected to be generated behind such opaque screens filtering our universe, these particles can carry cosmic information from behind those screens, zoom across great distances while interacting with essentially no other matter, and deliver pristine, untouched information to humanity about elusive corners of outer space.

“We are very lucky, in a sense, because we can access an amazing understanding of this object,” Elisa Resconi, of the Technical University of Munich and IceCube team member, said of NGC 1068.

It’s also notable that there are many (many) more galaxies similar to NGC 1068 — categorized as Seyfert galaxies — than there are blazars similar to TXS 0506+056. This means IceCube’s latest discovery is, arguably, a larger step forward for neutrino astronomers than the observatory’s seminal one.

Perhaps the bulk of neutrinos diffusing throughout the universe are rooted in NGC 1068 doppelgangers. But in the grand scheme of things, there’s far more to the merit of neutrinos than just their sources.

These ghosts, as Justin Vandenbroucke of the University of Wisconsin-Madison and an IceCube team member put it, are fit to solve two major mysteries in astronomy.

First off, a wealth of galaxies in our universe boast gravitationally monstrous voids at their centers, black holes reaching masses millions to billions of times greater than our sun’s. And these black holes, when active, blast jets of light from their guts — emitting enough illumination to outshine every single star in the galaxy itself. “We don’t understand how that happens,” Vandenbrouke said simply. Neutrinos could provide a way to study the regions around black holes.

Second is the general, yet persistent, conundrum of cosmic rays.

We don’t really know where cosmic rays come from either, but these strings of particles reach energies to and beyond millions of times higher than we can reach here on Earth with human-constructed particle accelerators like the one at CERN.

“We think neutrinos have some role to play,” Vandenbroucke said. “Something that can help us answer these two mysteries of black holes powering very bright galaxies and of the origins of cosmic rays.”

A decade to catch a handful

Basically, this observatory tells us every time a neutrino happens to interact with the ice shrouding it. “Neutrinos hardly interact with matter,” Vandenbrouke emphasized. “But they do interact sometimes.”

As millions of neutrinos shoot into the icy region where IceCube is set up, at least one tends to bump into an atom of ice, which then shatters and produces a flash of light. IceCube sensors capture that flash and send the signal up to the surface, notifications that are then analyzed by hundreds of scientists.

Ten years of light-flash-data allowed the team to pretty much map out where every neutrino seems to be coming from in the sky. It soon became clear there was a dense region of neutrino emissions located right where galaxy NGC 1068 is stationed.

But even with such evidence, Resconi said the team knew “it’s not the time to open the champagne, because we still have one fundamental question to answer. How many times did this alignment happen just by chance? How can we be sure neutrinos are actually coming from such an object?”

So, to make matters as concrete as possible, and really, truly prove this galaxy is spitting out ghosts, “we generated 500 million times the same experiment,” Resconi said.

Upon which, I can only imagine, a bottle of Veuve was popped at last. Though the hunt isn’t over.

“We are only beginning to scratch the surface as far as finding new sources of neutrinos,” Ignacio Taboada of the Georgia Institute of Technology and IceCube team member said. “There must be many other sources far deeper than NGC 1068, hiding somewhere to be found.”