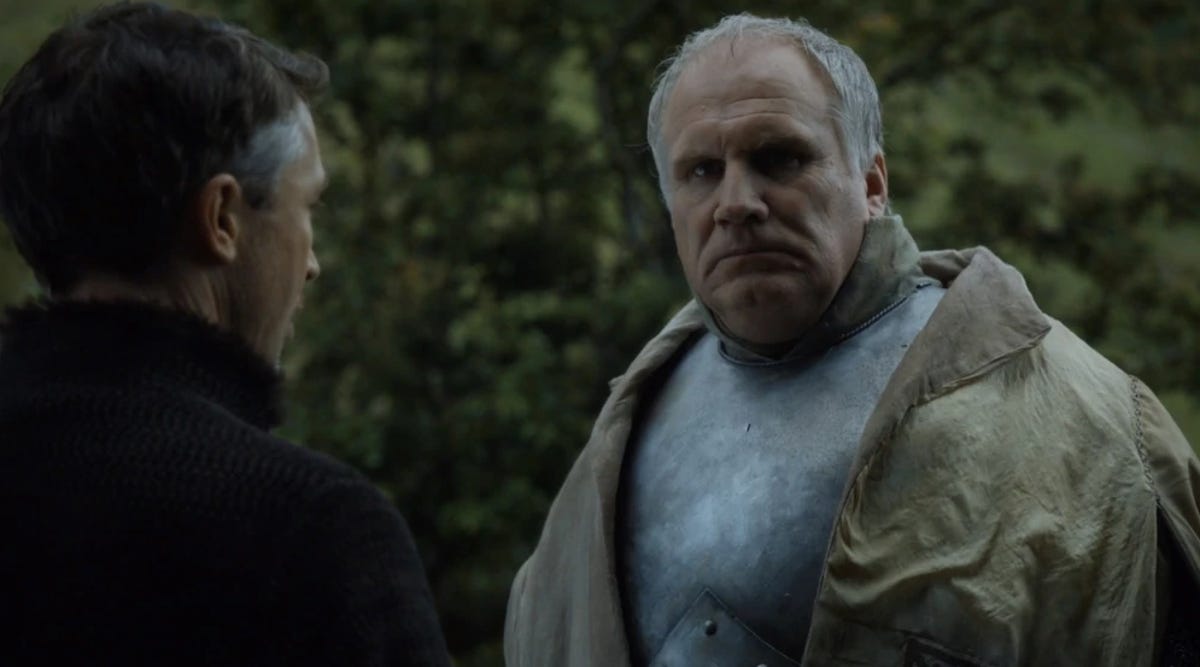 Slowly but surely, House of the Dragon is working up to the cataclysmic Targaryen civil war known as the “Dance of the Dragons”. Though the seeds were planted as early as episode 1, we saw them begin to well-and-truly sprout in episode 5. The battle lines are drawn: Queen Alicent feels betrayed by Viserys and Rhaenyra, so she’s ready to fight. Meanwhile, Rhaenyra has wed Laenor Velaryon, but seems most enchanted by her uncle, Daemon Targaryen.

Then there’s the prickly Ser Criston Cole, who savagely killed Ser Joffrey Lonmouth at the end of the episode. He was behind Rhaenyra before, but now appears to be in Camp Alicent. In short, it’s all happening.

As we prepare for episode 6, which a teaser showed us features a time jump of over a decade, here are some fine details, throwbacks and Easter eggs from episode 5 that you may have missed.

After hearing Daemon Targaryen’s resentful mentions of his “bronze bitch” for 4 episodes, we finally got to meet Lady Rhea Royce. Unfortunately, she was not long for this world. Daemon killed her in the opening scene of the episode.

A few things about this.

First, if the Royce name is familiar to you it’s probably because of Lord Yohn Royce, who was a recurring character in Game of Thrones from season 4. He was the portly Vale chap who was perpetually disgusted by Littlefinger. As for Runestone, the castle Daemon Targaryen intends to inherit, it was briefly seen in season 5 of Game of Thrones, when Robin Arryn was (unsuccessfully) being trained to fight with a sword and shield.

As for Lady Royce herself, in her brief appearance she showed herself keenly aware of the bitter comment Daemon has made about her over the years.

“What brings you to the Vale,” she asks him. “Have you at last come to consummate our marriage? The Vale sheep might be willing, even if I’m not. Our sheep are prettier, after all.”

This is a callback to something Daemon said all the way back in episode 1, when the Small Council was haranguing him over the excessive force he commanded the City Watch use. “In the Vale, men are said to fuck sheep instead of women,” he said when Otto Hightower suggested he head back to see his wife. “I can assure you, the sheep are prettier.

After King Viserys crosses the t’s and dots the i’s with Lord Corlys on the marriage arrangements between Rhaenyra and Laenor, we see the two betrothed walking by the beach.

Rhaenyra tells Laenor, as gently as she can, that she knows he’s gay, and that she could never change his orientation. She, too, has specific tastes of her own, and doesn’t expect Laenor to change that. So she proposes a deal: They have kids to make their fathers happy, then they’re free to pursue whatever relationships make them happy.

This is mirrors a conversation Margaery Tyrell had with Renly Baratheon. Following the death of King Robert, Renly made a claim for the Iron Throne, and wed Margaery of the wealthy Tyrell house to strengthen his backing. They were unable to consummate the marriage, however, because Renly was actually in love with Margaery’s brother, Ser Loras Tyrell.

“Save your lies for the court, you’re going to need a lot of them,” Margaery told Renly when the former acted indignant at her insinuation that he was gay. “Your enemies aren’t happy about us, they want to tear us apart, and the best way to stop that is to put your baby in my belly.”

Rhaenys Targaryen has had only a supporting role thus far in House of the Dragon. In episode 5, though, we got a glimpse of her great talent: Dragonriding. In the Fire and Blood book, it’s noted that Rhaenys had been riding her dragon, Meleys, since she was 13.

“We can go back to the ends of the earth together,” she told Lord Corlys on their wedding day, “but I’ll get there first, as I’ll be flying.”

A small thing to note on a difference from book to TV show. We saw Ser Criston Cole brutally beat Laenor’s lover, Ser Joffrey Lonmouth to death, at the climax of episode 5. In the Fire and Blood book, however, it’s said that Ser Criston actually killed Lonmouth in a jousting contest.

In King Viserys’ speech, the one interrupted by Alicent Hightower’s entrance, he made note of the seven days of feasting and jousting planned before the wedding. In the show, that never happened because of Cole and Lonmouth’s brawl. In the book, the jousting tournament did indeed go ahead.

It was written that Ser Criston Cole fought in a “black fury” because Rhaenyra didn’t bestow a garter of blessing on him. “It was the Knight of Kisses who felt the fullest measure of his wroth,” it’s written in Fire and blood. “Cole’s favorite weapon was the morningstar, and the blows he rained down on Ser Laenor’s champion cracked his helm and left him senseless in the mud. Borne bloody from the field, Ser Joffrey died without recovering consciousness six days later.”

Fire and Blood is a history of the Targaryen Family written from the perspective of Arch Maester Gyldayn. The source Gyldayn refers to for several incidents during this time period is a court jester named Mushroom.

“A three-foot-tall dwarf possessed of an enormous head… Mushroom was thought feeble-minded, so kings and lords and princes did not scruple to hide their secrets from him,” Gyldayn writes. In a nod to the source material, we see a glimpse of Mushroom during the welcome feast. He’s onstage beating a drum during a musical performance.

Mushroom was put in the show at the behest of Paddy Considine, who plays King Viserys. “There’s actually a banquet scene in House of the Dragon, and I messaged [showrunner] Ryan Condal and said, ‘Ryan, can we stick Mushroom in there somewhere?'” the actor told Deadline. “I was fighting every minute to find an excuse to include Mushroom.”