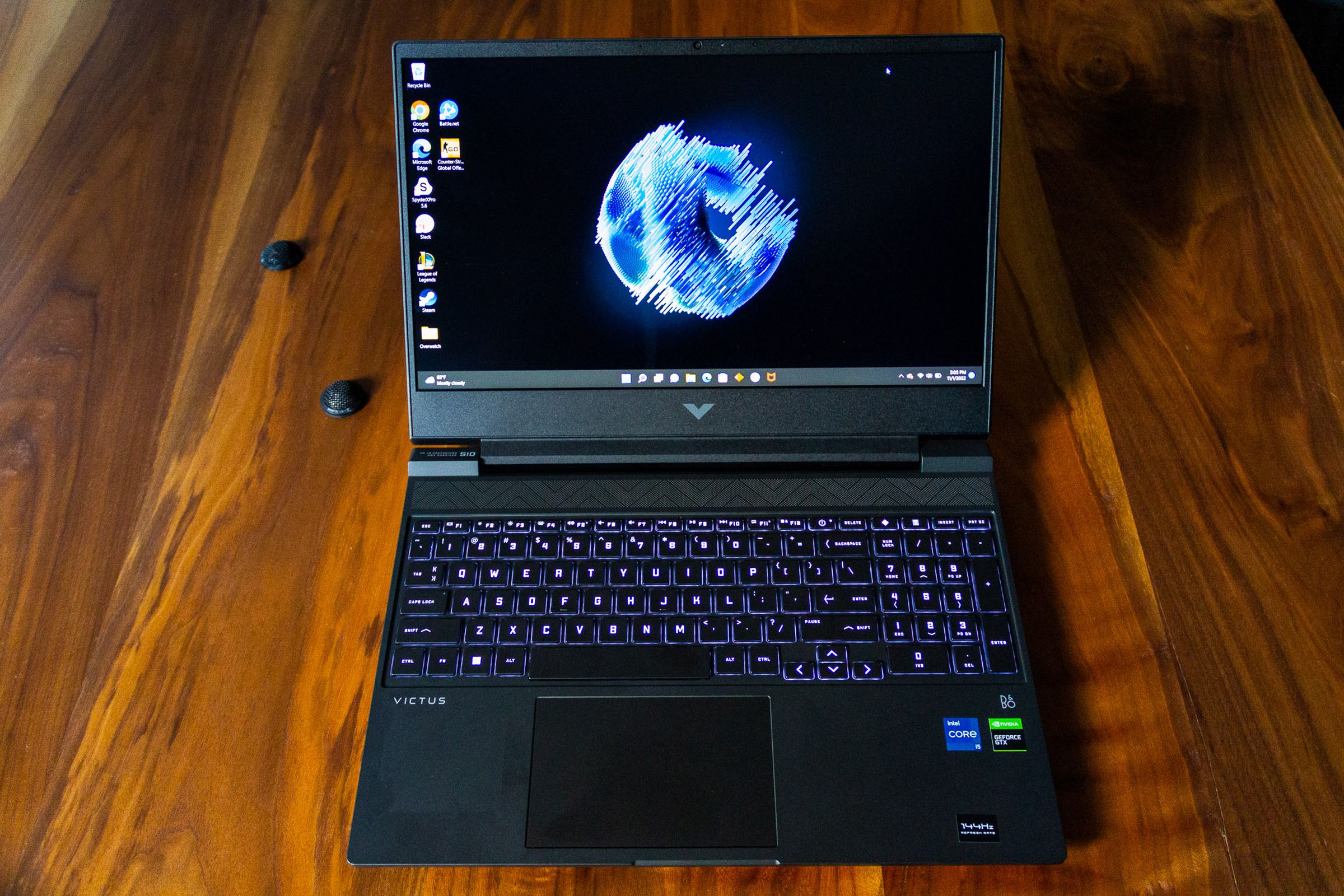 I have been searching far and wide for a budget gaming laptop that I could recommend for shoppers looking in the sub-$800 range. I was hoping and praying that the HP Victus 15 — which has been one of Best Buy’s most popular products this year — would be it.

My takeaway, having been gaming on the Victus ($799.99 for my Core i5/8GB/512GB/GTX 1650 model) for the past few days, is that it’s not the slam dunk I hoped it would be. The low price is quite attractive (and will be even more so if you can find it on sale), but the dated GPU inside our test model is not delivering the frame rates that I’d hope to see from a modern gaming laptop. That doesn’t mean that the Victus is a unilaterally bad purchase — just that, as is often the case with budget gaming laptops, you should go in with realistic expectations.

The Victus has an unobtrusive design. My review unit is almost entirely black with modest backlighting and a simple “V” on the lid (which, as you may notice in the photos, picked up a mess of fingerprints quickly). It’s more of a “could bring to the office” device than a “chaotic mess of RGB that will not leave the basement” device. At 5.06 pounds, it’s fairly portable (for a gaming laptop) but certainly not a lightweight device.

Ports include most of what you’ll probably need — two USB-A, one USB-C, one audio jack, one HDMI 2.1, one Ethernet, and one full-sized SD reader in addition to the charging port. There’s no Thunderbolt 4, which is worth noting (even though Thunderbolt 4 isn’t a requirement at this price point). My one note about the chassis is really the touchpad. Not only does it pick up fingerprints easily, but it has quite a stiff click.

Ports include most of what you’ll probably need

Of course, this is a gaming laptop, and the gaming performance is what matters. I would call my results in that area “acceptable” for the GTX 1650 inside. You can certainly game on this thing, but I don’t see the bang for your buck as exceptional here.

Lighter titles like League of Legends and CS:GO easily maxed out the Victus’ 144Hz screen. Overwatch 2 got up there after I bumped the graphics down to medium (and still achieved a respectable 78fps on the Epic preset).

But heavier fare gave the Victus more trouble, and I would recommend that you look for a better GPU if you plan to play these titles often. Red Dead Redemption 2 only averaged 38fps at its highest preset and 45fps at medium. Cyberpunk was a rougher ride, averaging only 39fps at medium and 24fps at ultra. The good news for RPG fans is that the Victus 15 can run Elden Ring at around 45fps at maximum settings, and bumping down to medium got me to 60.

And then there’s the ever-looming matter of battery. The lifespans we’ve been getting from this generation of Intel gaming laptops haven’t been great, and this Victus is no exception. I averaged just two hours and 19 minutes of regular work use with brightness around 200 nits and Battery Saver on. You can expect less when you’re gaming — I got an hour and 13 minutes of League of Legends play to one charge, playable the entire time.

I know many people don’t intend for their gaming laptop to leave their desk, but I do think a two-hour battery life will rule this device out as a primary driver for some users. You may not be able to make it through a full movie, let alone a work day, without the charger in tow. For price-sensitive shoppers, buying a secondary portable device for non-gaming use cases may not be realistic — so I do see this battery life as a problem.

Ultimately, the HP Victus 15 is an $800 laptop that can game. That fact alone is enough to recommend it to some degree (again, especially if you see it on sale).

But it is worth considering a few alternatives. For example, the Victus 15 with an RTX 3050 (which we’d expect to deliver a better experience on those AAA titles) MSRPs for $969 but is on sale for $697 as of this writing. Acer’s staple Nitro 5 with that RTX GPU is currently available for $899 (just $100 more than my test model), as is Dell’s G15 with an even more powerful RTX 3050 Ti. My point is that if you can pay just $100 more, can find a good discount, or are willing to buy used, there are all kinds of options available for close to this price that can really nail AAA games.

At the end of the day, this is a budget laptop with budget laptop frame rates — and if you’re in a position to do so, you can get much more gaming power for not too much more money.

Photography by Monica Chin / The Verge