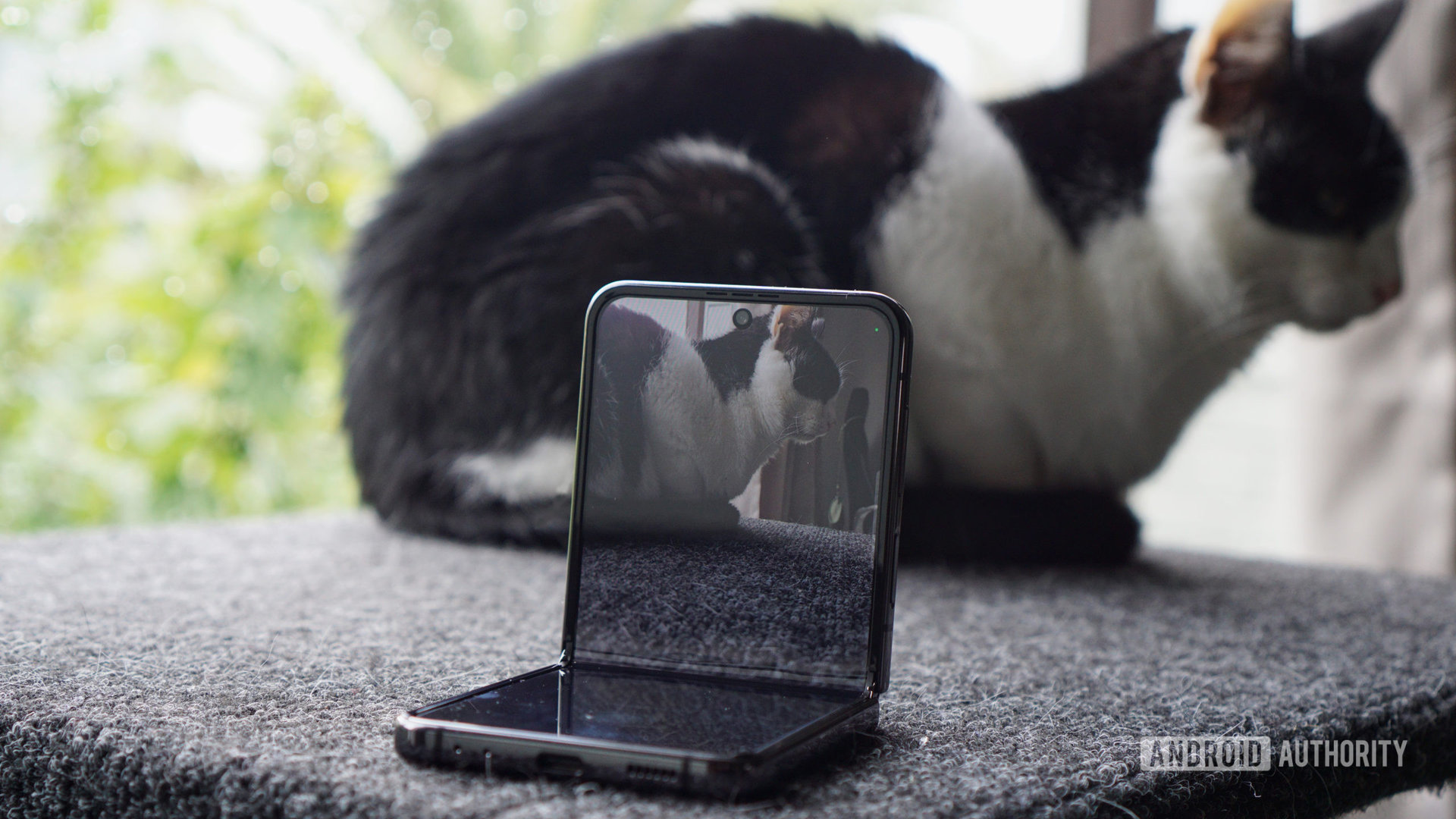 I found the purr-fect phone for you

Even as one of the few foldable phone lines you can actually buy in global markets, there are plenty of good reasons to dip a toe into Samsung’s Flip and Fold lineup. Features like improved screen durability, water resistance, and five years of software updates are all differentiating factors that make these phones an attractive purchase.

However, a real standout feature of Samsung’s foldables is Flex Mode, where you partially open the device like a laptop to reveal different use cases. This form factor allows you to use the phone as a makeshift tripod for photos or video calls, while also making video-watching a hands-free experience.

I’ve spent some time with both the Galaxy Z Flip 4 and Galaxy Z Fold 4 and quickly realized that Flex Mode is ideal for pet owners or parents with little kids in the household. I don’t need to hold the phone in my hand, I can plop it down on a table, couch, or on the floor and take some great photos and videos of me playing with my cat, hands-free.

Google Clips, but in foldable form

We recently got a cat so, naturally, my photo album quickly filled up with pictures of her to join the photos of our family dog. But I’ve found that the combination of the Galaxy Z Flip 4’s Flex Mode and the Single Take option makes for a fantastic way of capturing pets (and likely kids too).

For the uninitiated, Single Take mode is a camera mode on Samsung phones that records a short video clip (15 seconds on the Flip 4). Check out a sample clip below, combining Single Take with Flex Mode.

The real strength of Single Take is that it also captures a collection of photos and videos in addition to the main video. These include boomerang clips, fast-forward videos, filtered photos, slow-mo clips, and collages.

Single Take takes the hassle out of framing and editing shots.

The extra photos and video clips are created via scene analysis, with angles, facial expressions, and image quality all taken into account. And the photos are full-resolution too, rather than screenshots of the main video. You can view a gallery of some of them below and find a Google Drive folder with full-resolution photos and videos here.

Of course, the obvious benefit of Single Take is that it captures photos and videos without having to switch to different modes or make these edits myself. But Flex Mode also brings its own benefits when used in conjunction with Single Take — primarily being able to include myself in the photos and videos. That means both of my hands are free to play with my cat while also allowing me to enjoy the moment instead of looking through a screen. You won’t have to deal with handshake-induced judder either, the old arch-enemy of smartphone video.

Flex Mode plus Single Take means you’re free to play with your pet or child, capturing both of you in the process.

It all brings to mind the Google Clips camera from a few years ago. Google’s abandoned $249 mini-camera had a manual shutter button but could also automatically record video clips (up to seven seconds of footage at a time). The product was meant to be mounted on surfaces in order to organically capture moments as they happened rather than looking through a viewfinder and tapping the shutter key. In fact, there was no viewfinder in the first place.

Samsung’s phones can’t quite do the same persistent shutter-free capturing, but Single Take comes close by giving you a 15-second capture duration (or 10 seconds on older devices). Either way, I’d love to see more phones offer their own take (pun intended) on this mode. In fact, I’m surprised Google doesn’t offer a newer version of the Clips auto-shooting concept on its Pixel phones. Granted, they can’t prop themselves up, but hopefully, we’ll see this on a future Pixel foldable.

Where Single Take plus Flex Mode could be better

Shooting in Flex Mode with Single Take is pretty cool, then. But it’s not perfect by any means. For one, the mode didn’t always capture what I thought were the best moments in a clip. This isn’t a huge issue, but there have been a few times where I was left without what I thought was a no-brainer shot.

A bigger annoyance, though, is that the Flip can’t easily shoot photos or videos in landscape orientation. You can turn the phone on its side, but that makes it difficult to adjust the camera to an ideal height. In its intended orientation, Single Take offers cropped landscape photos now and again, but it’s a pretty rare sight. However, Galaxy Z Fold users can use Flex Mode and Single Take to shoot landscape videos and photos by default. The only real issue with using the Fold is that it’s more cumbersome, so setting things up can be a little awkward.

Single Take with the Galaxy Z Flip 4 isn’t without its flaws, such as finicky landscape capture and no secondary camera support.

I’d like to see a few other areas of improvement too. One easily-fixable limitation is that Single Take doesn’t take photos from secondary lenses, such as ultrawide cameras. Furthermore, while you can specify the types of media you’d like to capture (e.g. boomerangs, highlight videos, collage images), you can’t tweak the video quality. However, to be fair, the video tops out at a respectable 1,920 x 1,440 at 30fps (with some clips hitting 90fps), which isn’t bad for the amount of processing that’s happening.

It’s also worth noting that GIFs aren’t technically supported via Single Take. You’ll need to open the Samsung Gallery app and choose the GIF creation option, but the quality is pretty bad. I also really dislike the accompanying stock music for boomerangs and fast-forward clips. It would be great if you could turn this off so you can add music later if you really want it.

Samsung’s choice of music can be grating, and you can’t turn it off.

Do you use Single Take on your Samsung phone?

Turning back to the positives, I found Samsung’s palm gesture to be a handy (heh) way to activate the shutter in Flex Mode. It’s a long way from my first experience with this functionality back in the mid-2010s when I had to hold a smile for 20 or 30 seconds while an LG representative demonstrated the feature on the LG G3, but it’s still a useful trick.

Nevertheless, Samsung’s Single Take mode has long been one of the more fun and useful camera modes on modern smartphones. But the combo of this feature and a free-standing semi-open foldable definitely makes for a great pairing if you have pets or children.

An upgraded camera setup, a more powerful chipset, a larger battery, and a few new features make the Samsung Galaxy Z Flip 4 a solid upgrade over its predecessor.