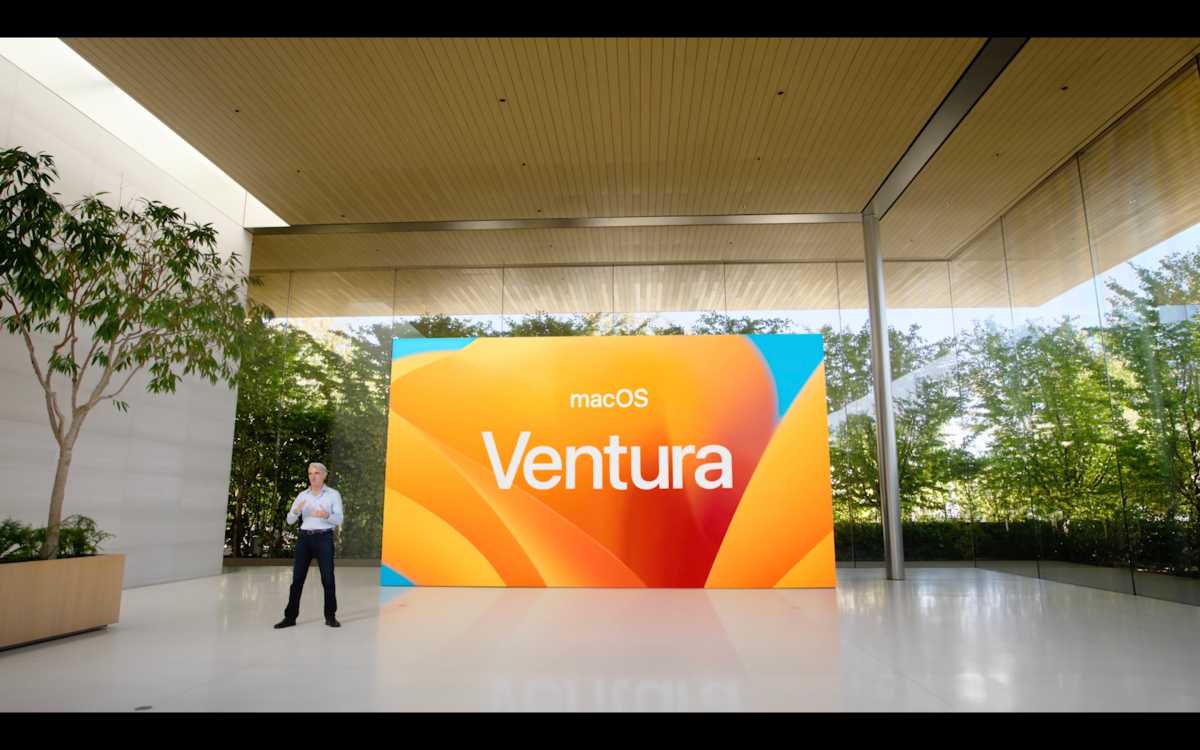 Apple has revealed some of the new features coming to macOS later this year. During the WWDC keynote Apple revealed the name of the next version of macOS as well as details of new innovations and updates to its Mac apps Mail, Safari and more.

You might think it sounds a bit like Windows Vista, but Ventura is the name for macOS 13. The name maintains Apple’s recent tradition of giving every version of macOS a name in addition to a version number. As usual, the name is taken from a landmark or area in California as has been the tradition since Mavericks launched in 2013. Prior to that large cats were used as names for Apple’s Mac operating systems. This time the version number will be 13 (unlucky for some, but that didn’t stop Apple from calling the 2021 iPhone the iPhone 13).

Apple unveiled the features coming to the next version of macOS during the WWDC 2022 keynote on June 6 at 10 a.m. PT. At the time, Apple promised the update will be “Coming this fall” but an update to the Ventura Preview webpage in September now says the update is “coming this October.”

In 2021, macOS Monterey arrived on Monday, October 25, so we expect a similar time frame for macOS 13. It is likely to follow the anticipated October Apple Event.

The first developer beta was made available shortly after Apple’s preview of the new macOS. Apple released the seventh developer beta on September 9.

Apple has confirmed that the following Macs are supported by macOS Ventura:

This means the following Macs, that were previously supported by Monterey, have now fallen off the list:

The 2014 Mac mini was sold until 2018, the ‘trash can’ Mac Pro until 2019, and the 2017 MacBook Air was sold until July 2019. We had thought that for Apple wouldn’t remove those Macs from the supported list, since people might have purchased the model just such a short time ago. At least they will still be supported by macOS Monterey for at least two more macOS generations. See: This is how long Apple supports Macs for. To find out if your Mac will support Ventura read: macOS 13 Ventura compatibility: Can your Mac run the latest version?

Some of the Macs that are supported by Ventura may not support all the new functions. Read: New macOS features that will only work on the newest models.

Continuity continues to evolve with the introduction of Stage Manager – a new way to manage your desktop clutter which reminds us a little bit of Spaces, because it allows you to organise working areas and hide them away, albeit at the side of your screen, rather than the top. Here’s how to use Stage Manager to organize your windows.

Another continuity related feature coming to Macs will allows you to use your iPhone as a webcam as well as Handoff a FaceTime call from your iPhone or iPad to your Mac. Continuity camera looks like a great way to benefit from the superior camera on the iPhone. One really impressive feature is Desk View, which displays two views to the person you are calling – your face and your desk. Using the iPhone camera means that Mac users can benefit from features like Portrait mode and Centre Stage and the new Studio Light feature. Read about how to use your iPhone as a webcam for your Mac.

Apple’s method to search your Mac – Spotlight – will be getting a revamp. Quick Look will allow you to preview files. You will be able to search photos by location, objects, people, and more. Live Text improvements mean that you will be able to search test within images and videos. Users will even be able to create a new document, start a timer, or more, from within Spotlight. More information here: How Apple has improved Spotlight search in Ventura.

Expect gaming on the Mac to truly take off (well Apple does anyway). Apple says that every new Mac will be able to run AAA games “with ease”. Improvements in Metal 3, MetalFX Upscaling and Fast Resource Loading API should benefit games developers.

In macOS Monterey and earlier, users didn’t get to control much of the AirPod’s settings, but that’s changing in Ventura. When Ventura launches users will finally get access to the full complement of AirPods settings, just like in iOS. Read more here: Full AirPods settings coming to your Mac.

Over the years at the same time as Apple has updated the Mac operating system it has also made changes to various apps that ship with the Mac, and we can expect more this year. Apple has revealed some of the new features coming to Safari and Mail along with updates to Weather, the Clock, new accessibility tools (such as Live Captions).

Mail will bring improved search, but probably the most anticipated feature will be the ability to cancel delivery of an email after clicking send (we imagine there is a time limit here) and also schedule sending an email. Both are features offered by third parties, but it’s good to see them coming to Apple’s email software. Read How to unsend and schedule email in Apple Mail for more information.

There is some confusion over the inclusion of the Hide My Mail feature, which should mean that it isn’t a requirement to share your email with third parties. Initially Apple referred to the feature, but this has since been erased from the webpage describing email features in Ventura, at least in some countries. Hide My Email isn’t new to Ventura – it arrived in Monterey in 2021, but in Ventura Apple was expected to extend it to third parties.

Like its iOS counterpart, Messages on the Mac will allow users to edit a message once sent and recover accidentally deleted messages.

Passkeys will be generated as a more secure means of identifying you and are associated with Touch ID or Face ID. These will replace passwords. Apple claims that “Passkeys are unique digital keys that stay on device and are never stored on a web server,” therefore they are more secure because it is impossible to leak one, or for anyone to phish one from you.

You may like to read about what to expect from Apple in 2022 as well the latest information about iOS 16.