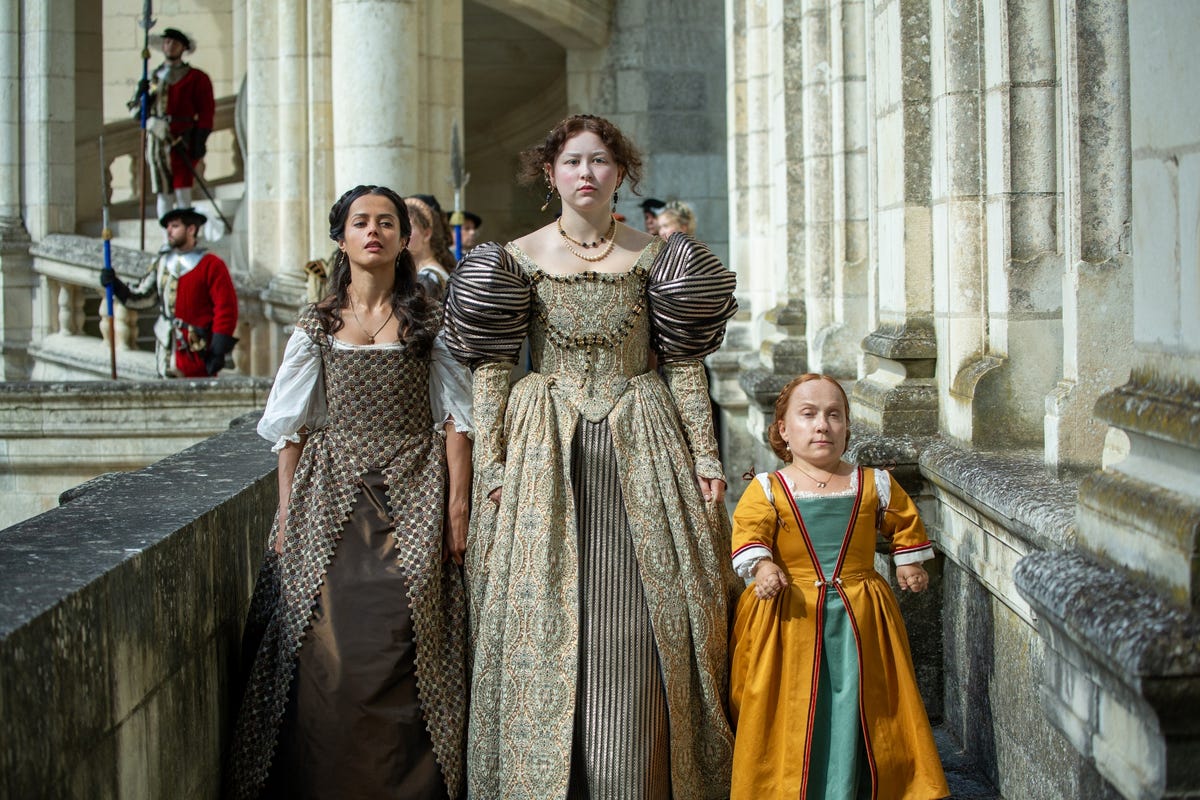 Queen Catherine de Medici’s reputation preceded her, built on gossip, respect — and fear. Her evolution from orphan to calculating and vicious French monarch is a mixture of myth and fact, and Starz‘s new period drama, The Serpent Queen, glides into both territories. One thing that immediately stands out in the series is its fitting tagline which urges the audience to answer the queen’s question: “Tell me what you would have done differently.” The entertaining new original drama is ripe with soap-opera levels of pettiness, tense conflicts and real medieval history.

Premiering on Sept. 11, The Serpent Queen features Academy Award nominee Samantha Morton as adult Catherine, who tells her story to a servant girl named Rahima through flashbacks. Known for poisoning her adversaries, and thus earning her charming nickname, the queen is aware of all the rumors floating around about her. But she shares some advice with the girl. “One must learn to exploit an opponent’s weaknesses,” she says, a theme that lays the foundation for much of season 1.

Most legends about the Medici family tend to paint them as powerful benefactors who were either adored or reviled.   They had their hands in everything, and were like Renassiance-era Kardashians. Their undeniable, wide-reaching influence on the Italian Renaissance, politics, banking and religion throughout Europe made them famous and allowed their dynasty to endure for centuries. But their reign — and eventual demise — was rife with scandal, deception, misogyny and bloodshed. The show demonstrates how Catherine was not immune to that as a child or adult, but episode 1’s title, “Medici Bitch,” teases that you will learn exactly who she is.

The premiere introduces young, wide-eyed Catherine de Medici, played by Liv Hill, in her early years. It’s the 16th century in Italy. She loses her parents as a baby, lives in an orphanage run by nuns, gets kidnapped as a teen and then rescued by her uncle, who just happens to be the pope (Charles Dance of Game of Thrones).

There’s a whirlwind of entertaining palace intrigue as she winds up married to a teenage prince who’s more interested in his older lover, Diane de Poitiers, leaving Catherine’s survival dependent on having a son.

All of this is well-documented in history books, but viewers see history come to life through Catherine’s sparky personality and Hill’s delivery of witty, fourth-wall-breaking commentary. She quickly learns that aside from her trio of frenemy courtiers, she can trust no one, not even her own family. Besides contending with unrequited love, the young princess navigates politics, betrayal and the guilt you feel when you’re disloyal yourself. But the bright cinematography that arrived in France with Catherine signifies that there’s still hope for her after all.

Those visuals change as The Serpent Queen progresses, and so does the royal’s tone as she moves into adulthood. There’s no more humorous snark. A 15-year time jump finds Morton’s Catherine a mother of 10, and a birthing scene that rivals the C-section in House of the Dragon. Diane still casts a shadow over the inner workings of the throne and the royal marriage, and King Henri struggles to be respected among his subjects.

There’s one scene where Queen Catherine is visibly upset over the new royal emblem design, which appears to be their initials, H and C, intertwined. But she realizes it’s actually H and D, for Henri and Diana. In real life, you can find this emblem engraved on the Louvre today. Though the moment is one of many that displays the king’s romantic loyalty, he knows his wife is more than capable of wielding power. It’s also an example of how The Serpent Queen blends historical truths into its fiction.

While all this is happening, another plotline takes shape. Queen Catherine is recounting her life story to Rahima to distract herself from planning her son’s wedding to another famous monarch, Mary Queen of Scots. But 16-year-old Mary and her “four Marys” (historically accurate daughters of nobility who were part of her court) are at odds with the queen, who seems bent on grooming Rahima to become her cunning sidekick.

During the mid-1500s, religious friction between Catholics and Protestants threatened peace in France and other parts of Europe. The Serpent Queen doesn’t avoid showing how key historical figures like the Bourbons and Guises made backroom deals to maintain harmony or destabilize it in the region. As showcased in this series, their dynamic with Catherine de Medici began the moment she set foot on French soil at 14, and continued for decades. Controlling France’s throne isn’t just about bloodline succession, and the queen knows it. Mary is not the only threat.

Based on Leonie Frieda’s book, Catherine de Medici: Renaissance Queen of France, the show leans into Catherine’s alleged affinity for witchcraft, her discomfort with King Henri’s relationship with Diane and her raw ability to take and exert power. Morton’s portrayal pins Catherine as stoic, aloof and cool but with a soft spot for underdogs. Yes, there’s some humanity in Catherine de Medici, and through this version of her story, you may see why she turned out the way she did.

With its medieval power grabs, graphic deaths and feminine perspective, it’s inevitable that you’ll want to compare The Serpent Queen to Game of Thrones or Hulu’s The Great. Some similarities exist. However, writer Justin Haythe wants you to know that this is Catherine de Medici, and she’s telling her own story. Not male historians, and certainly not her enemies. And at the same time, it’s left up to the viewer to decide if she is indeed a venomous snake or just a woman who made the best out of her circumstances. It’s worth a watch if you’re interested in weighing what you would have done differently. The Serpent Queen airs Sunday at 8 p.m. ET on Starz.